Alkylation Will be Key Process in Reformulated Gasoline Era

Commercial alkylation plants use either sulfuric acid (H2S04) or hydrogen fluoride (HF) as catalysts. In the past, almost three times as much alkylate was produced using H2S04 as the catalyst as compared to processes using HF.

The relative importance of processes using HF has increased substantially, and these processes produce in the U.S. about 47% of the alkylate. In the last 5 years, however, more H2S04-type units have been built in the U.S. than HF-type units. Recent information that clarifies the dangers of HF are causing refineries that use HF to reconsider and/or improve their safety equipment and procedures.

This article reviews the complicated chemistry of alkylation as it applies to processes in commercial operation. The major H2S04 alkylation processes are described and compared, along with several process modifications that have occurred within the last few years. The second installment will discuss the processing details of hydrogen fluoride alkylation and some improvements, and the relative advantages of H2SO and HF alkylation will be compared.

Alkylation of isobutane with C3-C5 olefins involves numerous consecutive and simultaneous ionic reactions. The reaction sequences have within the last 10-20 years been found to be much more complicated than the relatively simple chain reaction sequences proposed many years ago. The olefins often react to a much higher degree in the early stages of the reactions than isobutane. The chemical sequences differ significantly when comparing H2S04 and HF or different olefins such as n-butenes and isobutylene.

The compounds: 1-butene, 2 butenes, and propylene generally react to a large extent first with the acid, and especially H2S04, to form isoalkyl esters. These esters later decompose to free an olefin and the acid.

Several key features of the chemistry are summarized because they help explain various industrial findings.

Alkylates are produced by three mechanisms designated as Mechanisms 1, 2, and 3 (Figure 1.). In Mechanism 1, C3-C5 olefins react with t-C4H9+ (a key intermediate cation) to produce C7 to C9 cations. Hydride transfer to these cations produces C7 to C9 isoparaffins (or alkylate). When the olefin is propylene, 1-butene, 2-butenes, or iso-butylene, and C5 olefins (amylenes), the resulting isoparaffins produced are di-methylpentanes, dimethyl-hexanes (DMHs), trimethyl-pentanes (TMPs), and various C9 isoparaffins, respectively.

With 2-butenes or isobutylene, alkylates having research octane numbers (RONs) of about 102-103 are produced via Mechanism 1. With H2S04, most of the 1-butene isomerizes to 2-butenes before alkylation, so that the composition and quality of the alkylate produced from either 1-butene or 2-butenes are essentially identical. With HF, only part of the 1-butene isomerizes, hence, many DMHs are formed by Mechanism 1. The DMHs have very low RONs, even lower than those for dimethyl-pentanes or Cg isoparaffins.

Mechanism 2 involves the formation of relatively heavy cations, such as C12-C20 cations, as intermediates by polymerization-type reactions. These cations then fragment to produce C5-Cg cations and olefins. Subsequent hydride and proton transfer results in the formation of C5-C9 isoparaffins (or alkylate).

Light ends, often most of the DMHs, part of the TMPs, and much of the heavy ends, are produced by Mechanism 2. The alkylates produced in this manner have RONs of about 88-89.

Much of the isobutylene and branched C5 olefins alkylate via Mechanism 2, whereas smaller fractions of 1-butene, 2-butenes, propylenes, and n-pentanes do not. In the case of isobutylene, importance when H2S04 is used as a catalyst.

In Mechanism 3, heavy cations, such as formed in Mechanism 2, are converted by hydride transfer to heavy isoparaffins. The quality of these isoparaffins is relatively low, often in the 86-88 RON range.

The relative importance of Mechanisms, 1, 2, and 3 are estimated as a function of RON when H2S04 is used as the catalyst and when only C4 olefins are used to alkylate isobutane, as shown in Figure. 1. Mechanism 1 is the predominant one for alkylates with RON values of 96 or higher, but Mechanism 2 is predominant at 90 to about 95 RON.

Hydrogen transfer reactions are important when HF is used as a catalyst, but not so important for H2S04. Overall, 2 moles of isobutane and 1 mole of the olefin react to form 1 mole of a C8 isoparaffin (usually TMP) and 1 mole of a paraffin with the same number of carbon atoms as the olefin.

With propylene and HF, often about 20% of the propylene is converted to propane. UOP data indicate that a small amount of n-butane is produced from n-butenes. 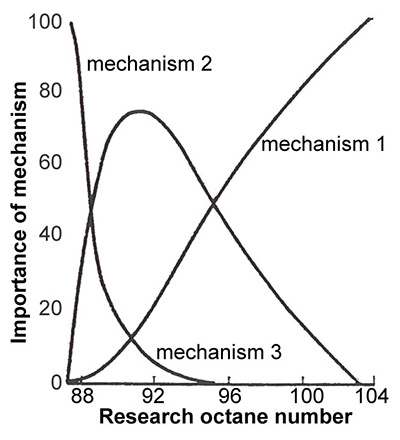 Conjunct polymers are a by-product in commercial alkylation processes. They are acid soluble, frequently being referred to as acid-soluble oils (ASOs) or red oil. They are excellent hydride transfer agents acting as a reservoir for the hydride ions being transferred from the isobutane, and they act as surfactants to promote increased interfacial surface areas. Too many conjunct polymers lead, however, to inactive catalysts which must then be regenerated.

About 0.4-0.6 lb of H2SO4 is frequently required to produce 1 gal of alkylate, but much lower values, such as 0.1-0.25 ppg, can be realized at preferred conditions. Acid costs frequently account for about one third of the total operating costs of alkylation when H2S04 is used as catalyst. There is hence considerable incentive to reduce H2S04 consumption

HF consumption is often in the range of 0.08-0.25 lb HF/gal of alkylate. Regeneration of used HF is relatively easy and cheap. Because most of the HF is recovered and recycled, the amount of make-up HF required is small, usually about 0.15-0.2 lb/bbl of alkylate. The conjunct polymers (or tarry bottoms) from the distillation column contain some HF. There are sometimes environmental problems in disposing of them. HF wastes can be treated with ASOs, or with calcium chloride and caustic.

The sulfuric acid composition has an important effect on alkylate quality and on the kinetics of the reactions. The optimum acid compositions differ appreciably. For 2-butene feed, the acid contains about 5-6% conjunct polymer, or red oil, and 0.5-1.0% water.

Water is always produced so that used H2S04 contains considerably more water by the time 5-6% conjunct polymers have formed. Reducing the water content in the acid is desirable. Acid consumption would likely be decreased by a factor of at least 2.

For HF, a water content of about 2.8% resulted in the best quality alkylate. Higher amounts of heavy ends, light ends, and DMHs are produced with lower concentrations of water.

Acid consumption generally decreases with lower reaction temperature, higher ratios of isobutane to olefin, improved agitation of the two-phase reaction mixture, and use of acids that promote high-quality alkylates. Considerably less acid is consumed when 2-butenes and 1-butene are used as compared to isobutylene.

Some refineries use isobutylene to produce methyl tertiary butyl ether (MTBE), and consequently use an olefin stream for alkylation that is mainly n-butenes. In such cases, acid consumption is normally relatively low.

It was reported how various impurities in the hydrocarbon feeds affect H2S04 consumption. These values are approximate because acid consumption depends significantly on the operating conditions employed.

This website uses cookies to improve your experience while you navigate through the website. Out of these cookies, the cookies that are categorized as necessary are stored on your browser as they are essential for the working of basic functionalities of the website. We also use third-party cookies that help us analyze and understand how you use this website. These cookies will be stored in your browser only with your consent. You also have the option to opt-out of these cookies. But opting out of some of these cookies may have an effect on your browsing experience.
Necessary Always Enabled
Necessary cookies are absolutely essential for the website to function properly. This category only includes cookies that ensures basic functionalities and security features of the website. These cookies do not store any personal information.
Non-necessary
Any cookies that may not be particularly necessary for the website to function and is used specifically to collect user personal data via analytics, ads, other embedded contents are termed as non-necessary cookies. It is mandatory to procure user consent prior to running these cookies on your website.
SAVE & ACCEPT